Weeks after Trump lost, Trump continued to defy reality and claim that he had actually won.  Weeks after the election results only about 10% of Republican House members admitted that Biden had won.  Many of Trump’s hard-care supporters were still believing him.  Some were mobilizing as gangs of armed thugs, threatening domestic terrorism, committing acts of violence, etc.  Trump continued provoking them, and huge right-wing media entities were supporting Trump’s coup against electoral truth and the U.S. Constitution.

Decades ago Fox News was created to be the propaganda outlet for the Republican Party, but now even Fox News is not far enough in the extreme right wing to satisfy Trump’s extremists, so Trump and they are supporting more extreme right-wing TV networks, including one that now has exceeded Fox in viewership.  See this:   https://www.youtube.com/watch?v=_-M2YaVokI0

This article says: “Trump’s Backers Are Becoming More Violent. I Fear What Will Happen in January.” SEE THIS:  https://truthout.org/articles/trumps-backers-are-becoming-more-violent-i-fear-what-will-happen-in-january/?eType=EmailBlastContent&eId=8565f177-ffb2-4b11-8dd3-00ed69c13391

On November 11, 2020, this article was posted with the title, “Things May Get Worse Before They Get Better for the U.S.”  It says that while many people are relieved that trump lost, “his steadfast support among white voters puts his party on a crash course with democracy.”  SEE THIS:  https://www.commondreams.org/views/2020/11/11/things-may-get-worse-they-get-better-us?cd-origin=rss&utm_term=AO&utm_campaign=Daily%20Newsletter&utm_content=email&utm_source=Daily%20Newsletter&utm_medium=Email

This November 12, 2020, article said Republicans are refusing to acknowledge that Trump lost, and Democrats are not taking that danger seriously:  https://www.theguardian.com/commentisfree/2020/nov/12/trump-election-concede-republicans-democrats

This November 12, 2020, article says a coup really is underway.  It is titled, ‘A Coup Is Underway’: Experts Warn Election Lies by Trump and GOP Leaders Could Unleash Violent Wave.  It says, “Underestimating Donald Trump is a mistake that people should not go on making. Laughing at him will not make him go away. If it did, he would have vanished decades ago.”  SEE THIS:  https://www.commondreams.org/news/2020/11/12/coup-underway-experts-warn-election-lies-trump-and-gop-leaders-could-unleash-violent?cd-origin=rss&utm_term=AO&utm_campaign=Daily%20Newsletter&utm_content=email&utm_source=Daily%20Newsletter&utm_medium=Email

By November 15, 2020, a number of people had expressed their insights into whether a coup was underway.  SEE THIS:  https://www.motherjones.com/2020-elections/2020/11/is-this-a-coup-we-asked-a-variety-of-humane-thoughtful-people-and-also-henry-kissinger/?utm_source=mj-newsletters&utm_medium=email&utm_campaign=daily-newsletter-11-13-2020

On December 2, 2020, this article was posted.  It says Michael Flynn, a powerful Trump appointee (National Security Advisor) who was convicted of breaking federal law and then pardoned by Trump, called for Trump to suspend the Constitution, impose martial law and run the election over again.  SEE THIS:  https://www.huffpost.com/entry/michael-flynn-martial-law-new-election_n_5fc7d3e6c5b6f3fe59724a45?b&ncid=newsltushpmgpolitics

On December 11, 2020, this news came out from Public Citizen (www.citizen.org), the savvy non-profit organization founded by Ralph Nader half a century ago.  Texas Attorney General Ken Paxton (a vigorous Tea Party member who had been indicted for many counts of securities fraud and was recently accused by seven of his own aides of bribery and other abuses of his office) might be seeking a pardon from Trump.  Paxton cited the already-debunked myths about voter fraud when he filed an absurd lawsuit in the U.S. Supreme Court demanding that it throw out the election results in Georgia, Michigan, Pennsylvania, and Wisconsin.  Also, 17 other states’ Republican Attorney Generals signed on to this utterly ridiculous lawsuit to reject democracy.  So have 107 Republican members of the U.S. House of Representatives.  CLICK HERE TO TELL THEM THEY ARE HORRIBLY WRONG in trying to subvert democracy:  https://publiccitizen.salsalabs.org/texas-lawsuit-election-georgia-michigan-pennsylvania-wisconsin/index.html?eType=EmailBlastContent&eId=b0dbe439-4fec-4e65-8d0a-d74622c984d9#1

The Supreme Court promptly — and UNANIMOUSLY — rejected the lawsuit mentioned above, but WITHOUT ANY COMMENT.  Two of the most conservative Justices said those states did not have legal “standing” to demand changes in other states’ election results.  SEE THIS:  https://www.dailykos.com/stories/2020/12/11/2001353/-Supreme-Court-hands-Trump-Republican-seditionists-the-ultimate-loss?detail=emaildkbn  AND THIS:  https://www.msn.com/en-us/news/politics/rallying-behind-trump-most-house-republicans-joined-failed-lawsuit/ar-BB1bRvrv?ocid=msedgdhp  AND THIS:  https://www.msn.com/en-us/news/politics/democrats-and-even-some-republicans-cheer-as-justices-spurn-trump/ar-BB1bRqiy?ocid=msedgdhp

Trump filed a huge number of utterly ridiculous lawsuits — WITHOUT ANY CREDIBLE EVIDENCE — and courts kept throwing them out.  Finally, Trump appealed to the galactic federation in pursuit of a court victory: 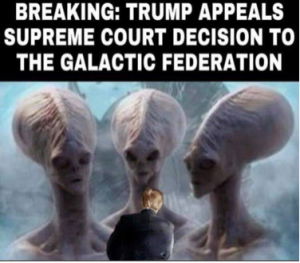 Nevertheless, Trump continued to provoke his cult followers into violence.

CLICK THIS LINK TO DENOUNCE THE POST-ELECTION VIOLENCE:  https://org.salsalabs.com/o/696/p/dia/action4/common/public/?action_KEY=23953

Our nation needs a serious discussion about whether we want to continue as a constitutional republic or have gangs of armed thugs use violence to decide who will run the government.