Trump and the Republicans LIED TO US when they said the tax scam they pushed through Congress in December 2017 would be good for ordinary people.  They promised it would create jobs.

We knew then — and we have solid proof now — that they were lying to us.  Their “Tax Cuts and Jobs Act” has been an absolute DISASTER for ordinary people and a GIGANTIC WINDFALL for extremely rich people and big business.

Several credible non-profit organizations and progressive journalists have laid out the facts.  Here are some highlights, with links for more information and several petitions to sign:

See several informative articles at the Summer 2018 issue of The American Prospect.  The print and online magazines — and their other articles, bloggers, etc., provide succinct and timely information.  See www.prospect.org and read articles about the December 2017 tax scam at this link:  https://prospect.org/magazine/issue/tax-fraud-tax-act-2017

In June 2018 Americans for Tax Fairness (www.americansfortaxfairness.org) released a “video report card grading the law’s performance.”  Watch it at this link:  https://www.facebook.com/Americans4TaxFairness/videos/1751578844925533/?link_id=1&can_id=1d662460c0abb8939c5044c82927552b&source=email-report-card-video-explaining-trumps-tax-scam-for-the-rich&email_referrer=email_374793&email_subject=report-card-video-explaining-trumps-tax-scam-for-the-rich

Six months after passage of the first tax scam legislation, here is what we know:
• 83 percent of the tax cuts will end up going to the richest 1 percent.
• Just 4 percent of workers have received a bonus or pay hike due to the tax cuts.
• Pharmaceutical companies, health insurers, Wall Street banks and other major industries are getting huge tax breaks but are not sharing the wealth with consumers or their employees.

On July 4, 2018, William Rice, a knowledgeable person, published an article titled, “The Top Ten Fallacies About the New Trump-GOP Tax Act.”  The American Prospect’s blog introduced their link to the article by writing:  “Like most of Donald Trump’s policy agenda (and the rest of his career and life), the GOP tax cut has been sold on bluster, exaggeration, and outright lies. Here are ten of the biggest myths associated with the 2017 Republican Tax Act.”  Here is the link:  https://prospect.org/article/top-ten-fallacies-about-new-trump-gop-tax-act

On July 16, 2018, Americans for Tax Fairness (www.americansfortaxfairness.org) sent an e-mail that included this message:  “Since Congress passed the Trump-GOP tax scam, most working families haven’t received a raise. In fact, just 4% of the country’s 155 million workers have seen any pay increase, despite promises to the contrary.  …  But one member of Congress certainly had a big pay day. The very same day that House Republicans passed the Trump-GOP tax scam, Rep. Vern Buchanan (R-FL) bought himself a 70-foot yacht.   You see, this tax law is riddled with so many loopholes, that Rep. Buchanan will personally benefit with a tax cut worth up to $2.1 million a year!”

On August 29, 2018, The Progress Report (progress@americanprogressaction.org) released a powerful graph showing the gross economic injustice that the Trump/Republican tax scam has caused.  It shows that while wages remain flat, the tax scam vastly escalated corporate profits.  See this image: 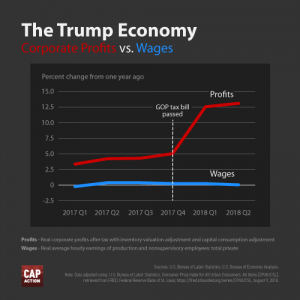 Next, Trump proposed ANOTHER ROUND of elitist tax scam that would cement the worst economic policy in a generation.  It actually passed the U.S. House a few days after this article appeared in September 2018:  https://truthout.org/articles/trump-tax-plan-2-0-cements-the-worst-economic-policy-in-a-generation/   Also see several relevant articles about that in the blog of Americans for Tax Fairness:  https://americansfortaxfairness.org/category/blog/

In October 2018 Republican leaders in both the U.S. House and Senate — and Trump himself — were pushing cuts in Social Security, Medicare and Medicaid in order to pay for their gigantic tax cuts benefitting extremely rich people and big business.  Suddenly — after their humongous tax cuts — Republicans resorted to expressing concern about deficits.  Several progressive organizations reported on this.

The party’s over.  The U.S. ran a budget deficit of $779 billion in fiscal 2018—the largest in six years—despite a strong economy, a sign that the Trump tax cuts are taking a toll on revenues and throwing the federal budget out of whack, according to The Wall Street Journal.  The shortfall for the fiscal year that ended Sept. 30 rose 17 percent from 2017’s $666 billion; in future years the deficit is on its way to $1 trillion.

According to the Journal:  “Deficits usually shrink during economic booms because strong growth leads to increased tax revenue as household income, corporate profits and capital gains all rise. Meantime, spending on safety-net programs like unemployment insurance and food stamps tends to be restrained.

“In the last fiscal year, a different set of forces was at play as economic growth sped up. Interest payments on the federal debt and military spending rose rapidly, while tax revenue failed to keep pace as the Republican tax cuts for both individuals and corporations kicked in.”

What’s next? Republicans will likely target government spending, including Medicare, Medicaid and Social Security, Democratic lawmakers say; GOP budgets in the past have called for cuts to food stamps, disability benefits, welfare and student loans.

Here’s a great list of 11 ways “tax cuts” end up shifting costs onto the rest of us:

In addition to raising taxes on people with huge incomes, we should also tax the WEALTH — the accumulated assets — of people who hold enormous wealth, regardless of what income they receive.  Wealth inequality is as serious — and probably more serious — a problem than income inequality.  The top 1% of people in the U.S. now owns as much wealth as the bottom 95%, according to UC Berkeley economists Emmanuel Saez & Gabriel Zucman.  Senator Elizabeth Warren is proposing a 2% wealth tax on Americans who have assets over $50 million. For billionaires, there would also be a 3% tax on assets over $1 billion.  SIGN THIS PETITION:  https://www.dailykos.com/campaigns/petitions/sign-the-petition-support-elizabeth-warrens-wealth-tax-for-the-mega-wealthy?detail=emailaction&link_id=1&can_id=1d662460c0abb8939c5044c82927552b&source=email-statefull-default-state-signatures-needed-a-wealth-tax-on-billionaires&email_referrer=email_486077&email_subject=statefull-default-state-signatures-needed-a-wealth-tax-on-billionaires

The people who got RICH from our political and economic systems have the GREATEST RESPONSIBILITY to pay for the system that made them RICH.

Likewise, we need a strong ESTATE TAX so the public can retrieve for the government some of the vast wealth that rich people have gained from the political and economic system that made them rich!

ALSO SIGN THIS PETITION to repeal the Trump/Republican tax scam of December 2017:  https://actionnetwork.org/petitions/sign-now-repeal-trumps-tax-cuts-for-the-rich-and-corporations?source=direct_link&&link_id=0&can_id=1d662460c0abb8939c5044c82927552b&email_referrer=email_498126___subject_641855&email_subject=guess-how-much-gm-and-amazon-are-getting-back-as-a-tax-refund

How to fix the Republicans’ disastrous tax law of December 2017: